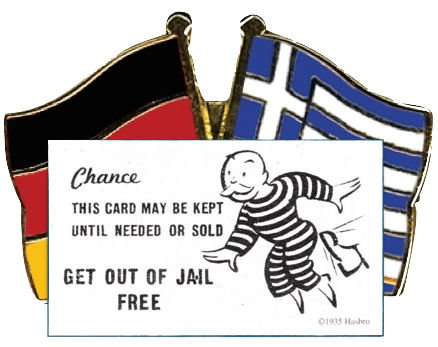 I’ve been watching the debt situation in Greece unfold with curiosity and interest. Germany, who had much of their national debt forgiven and the rest restructured after each of the two world wars, is now insisting that Greece repay its own debt in full—even though Greece was among the nations that forgave Germany much of its debt in 1953. This story put me in mind of Jesus’ “Parable of the Unforgiving Servant,” wherein a king threatens to throw his servant in jail if he can’t repay the ten thousand talents he owed. (This was a staggering amount of money.) Hearing the servant’s pleas for more time, the king forgave the entire debt. Incredibly, this same servant then went out and seized upon a fellow servant who owned him a mere 100 denarii. When that servant in turn begged for more time, the first servant had him thrown in jail. Told of the affair, the king was so outraged at the servant’s behavior in the face of the mercy he had received that he had the man thrown in prison himself.

We, who have been forgiven much, are called to forgive others as well. The question I pose this Sunday is a simple one: Do Jesus’ teachings only apply to the interpersonal level or does it offer us any guidance as we look at this multinational situation unfold? More to the point, should we bring the lessons of our faith to our evaluation of “secular” life? Join me this Sunday for an exploration of this interesting issue. I’m looking for your input and wisdom. See you Sunday.

Yours on the journey,